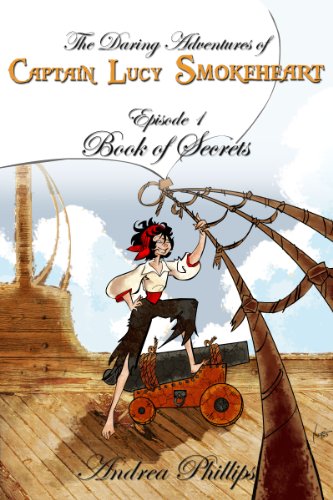 
His gaze darted to the door when the newcomer arrived, then stayed fixed on the curiosity to be found there. It was a fresh-faced girl, not a day over seventeen, in the breeches and bare feet of a sailor. She leaned her elbows on the bar. Got any grog? The tavern owner, a weathered woman of advancing years and retreating teeth, frowned over her new customer.

Pretty girl like you shouldn't be out by yourself, she warned. They say— and here her voice fell to a whisper— They say Smokeheart's ship has been sighted off the coast. We're in danger, every last one of us!

You don't say. How terrible! Captain Smokeheart, was it? The infamous pirate? Aye, lass. Another patron clomped up. He was a red-bearded giant of a man, and he swayed gently where he stood, though it was hard to tell if it was due to drink or legs unaccustomed to dry land.

He spat on the floor. They say Smokeheart's flag means certain death, y'know. She'll burn a town as soon as loot it. This could be our last brew, men! He drained his mug and then set it down with a bang.

Get me another, Gertie, there's a good lass. Another voice chimed in from the shadows. They say she has a bargain with the mermaids, and they follow her ship to devour the enemies she throws overboard! And another: She studied the arts of war and fire in far Cathay, and she knows fifty ways to kill armed with nothing but a sausage! They say the Queen of Persia has a bounty on her head rich enough for you to live in luxury all the rest of your days!

The girl preened a little. Well, she said modestly, a girl could do worse than a god, don't you think? His companion elbowed him hard in the ribs, but it was already too late. The girl scowled and drew her cutlass. You take that back, she said.

Some of us are just… late bloomers! The tavern went still for three slow heartbeats, as those assembled deduced what you, clever reader, will have already worked out on your own some time ago: the girl was none other than Captain Lucy Smokeheart herself! Get her, mateys! We'll split the bounty!


The rest of the patrons followed suit and rushed to take her. Lucy Smokeheart, though, was more than a match for a few drunkards.

She threw over a table and rolled it toward the corner, knocking four of her attackers into an irretrievable tangle. Then she leapt onto the bar and disarmed five in a row, blade dancing in and out so fast the eye couldn't hope to follow. They all swore and backed away, hands stinging. The last three, perhaps possessing somewhat less rum and somewhat more greed in their blood, surrounded her.

The red-bearded one sized her up. So you're Lucy Smokeheart, eh? You don't look so fearsome to me. He spat on the floor at her feet. Fearsome is as fearsome does, gentlemen, she said, and then she kicked him in the groin. He howled and stumbled back. The other two fell on her, but their swords found nothing but empty air. She grabbed a tankard from the bar and took a quick swig, only to spit the liquid into the closer man's face. He dropped his cutlass and reeled backward, clutching at his stinging eyes.

Then she struck the other one over the head with the empty vessel.

He dropped to the floor. Our lonesome man, the clean-shaven Englishman, tried to disappear into his drink. Alas for him, it did not work, and Lucy's attention fell upon him. You, she said, and her eyes narrowed. She held the point of her cutlass to his neck, voice and hand unwavering. You're Bald-Chinned Bill. You served on Captain Carver's ship, the Sunbird.

He whimpered. No, no, miss, you've got the wrong man! Spare me! I — I didn't even try to fight you, and I don't mean no harm! I don't know nothing! Don't lie to me! She grabbed him by the throat and leaned in close, her teeth flashing in the lamplight as she smiled. See if you have enough points for this item. Sign in. Carnivorous mermaids!

Swedish ice sorcerers! Enormous amounts of chocolate! The City Below! Join the fearless Captain Lucy Smokeheart and her crew as they hunt for her missing brother and his lost treasure. The journey will be full of adventure, magic, danger -- and a mystery for you to solve! In each chapter, you'll get a clue to where the treasure is hidden. Solve them online to see another side to the story! This edition includes all twelve episodes of Lucy Smokeheart, plus a solve appendix with answers to all of the puzzles, and translations of all the bonus content found on the Lucy Smokeheart website.

Are you ready for adventure? John Flanagan. Cayla Kluver. The Sea of Trolls. Nancy Farmer. The Thing About Weres. Leigh Evans.